This site uses cookies and related technologies to enhance user experience, analyze performance and traffic on our website, and to enable our service providers to provide you with targeted communications. For details on the personal information we collect, review our Privacy Policy. 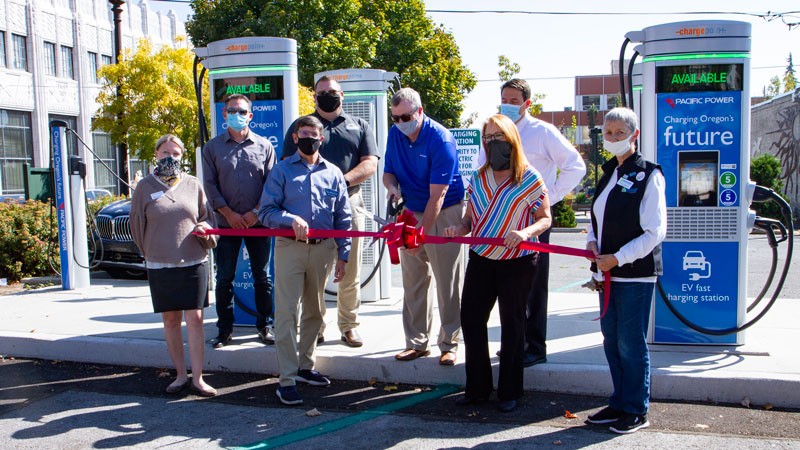 KLAMATH FALLS, Ore. — Oregon has big plans for electric vehicles. The state’s goal is to have 50,000 EVs on Oregon’s highways and byways by the end of 2020. Pacific Power and the City of Klamath Falls have teamed up to ensure electric vehicle drivers have another fast, convenient place to power up during journeys along the eastern slope of Oregon’s Cascade Range.

The strategically-placed charging station is part of a larger effort by Pacific Power to ensure that underserved rural communities have access to chargers, according to Todd Andres, regional business manager for Pacific Power. “More electric fast chargers in Klamath County and beyond will ensure people get where they need to go. We’re grateful for partners in Klamath Falls that recognize the need for more charging options to help make the transition to electric vehicles easy and convenient for Oregonians.”

Klamath Falls leaders speak out on what the new EV chargers will mean to the community:

“The City of Klamath Falls is excited to see this new, worry-free option for electric vehicle users in our downtown. We appreciate the value of our forward-looking partnerships with the Downtown Association, Chamber of Commerce, Discover Klamath, and Pacific Power in getting this accomplished. This smart and genuinely open solution will support and encourage the new and growing subset of electric vehicle drivers to stop and spend some time in downtown Klamath Falls.”

“These charging stations are a great addition to downtown. As a place both visitors and locals like to spend time, this adds convenience to their time downtown. I think it’s also important to note the way our rural community, Pacific Power, and local businesses have embraced electric vehicles and this technology. I want to thank Pacific Power for investing in Klamath Falls.”

“EVs represent just 1.2% of all U.S. cars in 2020. That number is expected to reach 10% by 2025 and 28% by 2030. With demand for EV charging stations increasing, the new ChargePoint® station in downtown Klamath Falls sends the message to EV travelers that ‘Klamath Welcomes EV Owners.’ ”

Find out more about Pacific Power's public charging stations in Oregon at pacificpower.net/stations.